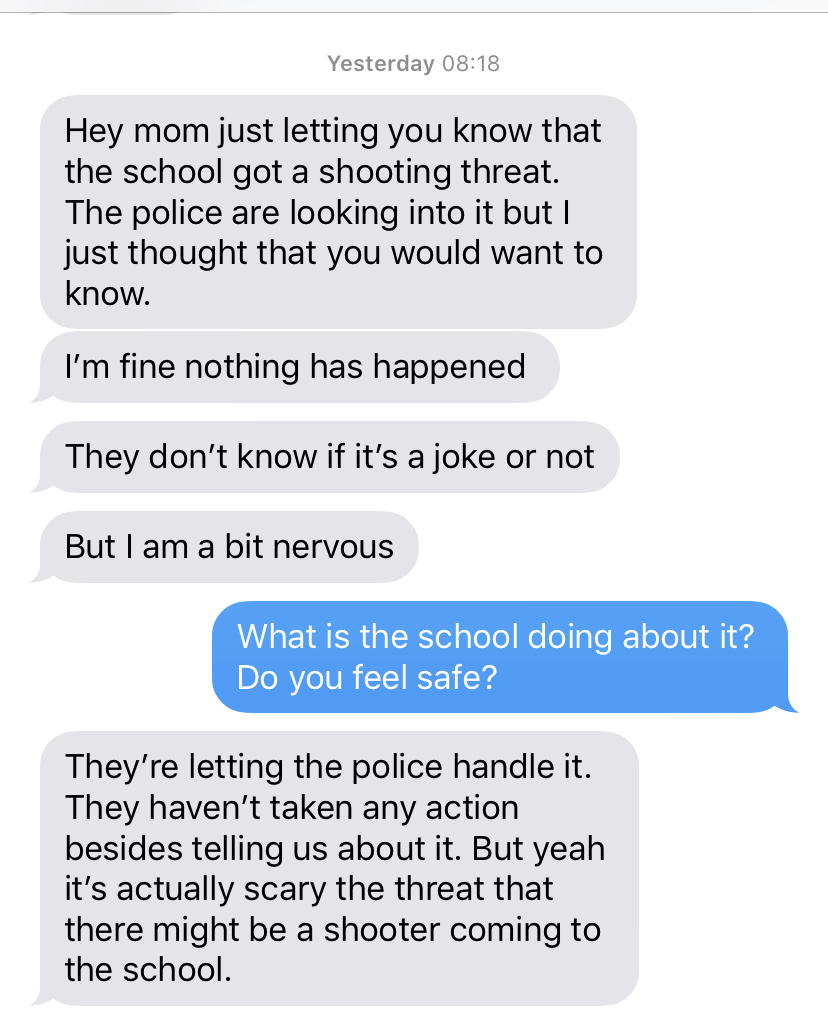 My day had begun pleasantly.

My kids were at school;  my husband was at work; I was preparing for my day. I was getting ready for work and left my phone downstairs on a charger. I rushed downstairs to grab my lunch and phone. I glanced at the screen to see four missing text messages from my high school-aged daughter. This was abnormal; phones are supposed to be limited in school, and she rarely messaged me during classes. I opened the thread to find this:

This was scary for her. She felt nervous and unsafe. I reassured her that everything would be fine and to follow the protocols from her teachers. She was wrong in her statement that the school was not doing anything. They had alerted parents through secure messaging and phone calls, had added extra security to the campus, and had called in the local police and FBI. The school had contingencies in place, and I told her to be extra vigilant of her surroundings and the people around her.

The threat was sent through social media. The authorities were able to locate the individual and apprehend them. The school day was a little quiet but relatively unchanged. My daughter was shaken up but mentally OK when she arrived home that day.

You want to know the worst part?

When I heard about it, I didn’t initially feel worried or scared. I rolled my eyes and hoped I would not have to leave work to pick her up.

I cringe even reading that. How could that have been my first reaction? It is terrible, but here is how: School shooting threats and shootings themselves have become nearly normal. A school shooting is and will always be an utter tragedy, but by normal, I mean, not particularly surprising … and this realization is what shocked me more than anything. The potential for a school shooting event has become the new normal for students, teachers, and parents across the country. What an awful truth to have to acknowledge.

The Center for Homeland Defense and Security at the Naval Postgraduate School reported that there were 82 recorded school shooting incidents in 2018. Eighty-two incidents – this does not take into account thwarted attempts and threats, violent events unrelated to guns, or to those that go unrecorded. This was the highest recorded number since 1970. The year 2018  was also the deadliest year for school shootings with 51 casualties.

Schools have done their part in preventing these incidents and threats. They have installed security guards and even metal detectors. School counselors and administrators have been trained on bullying, crisis management and intervention strategies. Schools are meant to be a safe place, and I firmly know that everyone from the principal to the cleaners works hard to ensure that schools remain as safe as possible.

School-aged children are well trained also. Our children are familiar with lockdown drills, active shooter protocols, and prevention techniques. I might have a teenager, but I’m not too old to remember these things; they started when I was in high school. Somewhere along the way, our tornado drills were replaced with school lockdowns. We learned all about bullying and feared who could feel threatened enough to carry out such an act. We took it as seriously as high school students itching to get out of class would take it, and I imagine my kids do the same. The education and training are there.

And this is all great. We are prepared. We take steps to ensure that this does not happen, even though it keeps happening in cities and schools around the country. I know that I feel much better about sending my children to school when there are safety measures in place, even if the risk is always present.

We become complacent. We fall back into that arrogance that it will never happen at our school or to our kids. We see the news of a school shooting or violent incident on TV and feel sad. We might share it to our social media and offer “prayers.” But in the end, it is another day where another incident occurred; where we shake our heads and wonder how this could happen; and we turn off the TV and fall asleep feeling secure that this will not happen to us.

It took just one threat and one moment of introspection to realize that I can not afford to be complacent.

School shootings, threats, and violence have become the new normal.

I do not mean that they happen to every school and every student. I, like every parent, child, and decent person in this country, hope that we never see one tragedy again. But their existence and prevalence cannot be ignored. There are many proposals and ideas to change this state of normalcy and to reduce those staggering statistics above, but action is slow. In the meantime, our children, our teachers, and our communities still live with this new normal.

Most importantly, I cannot afford to comfort myself with flawed logic, the idea that it will never happen to us. Because if you had asked every parent of a child involved in a school shooting, they would have expressed this same thought before it DID happen to them.

So the next time my daughter or son has an active shooter drill at school, I will tell them to pay attention and stop complaining. When the school sends home another letter about a remark on social media that had to be investigated, I will read it and talk to my children instead of throwing it out. And if and when there is another credible threat to one of their schools, I will not roll my eyes. I will take it seriously because it is serious. It is possible. And unfortunately, it is normal.

One threat, an event thwarted, a child and school safe – and a lesson for this mother. 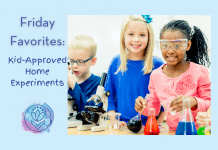 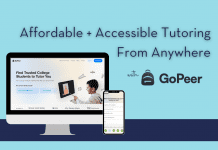 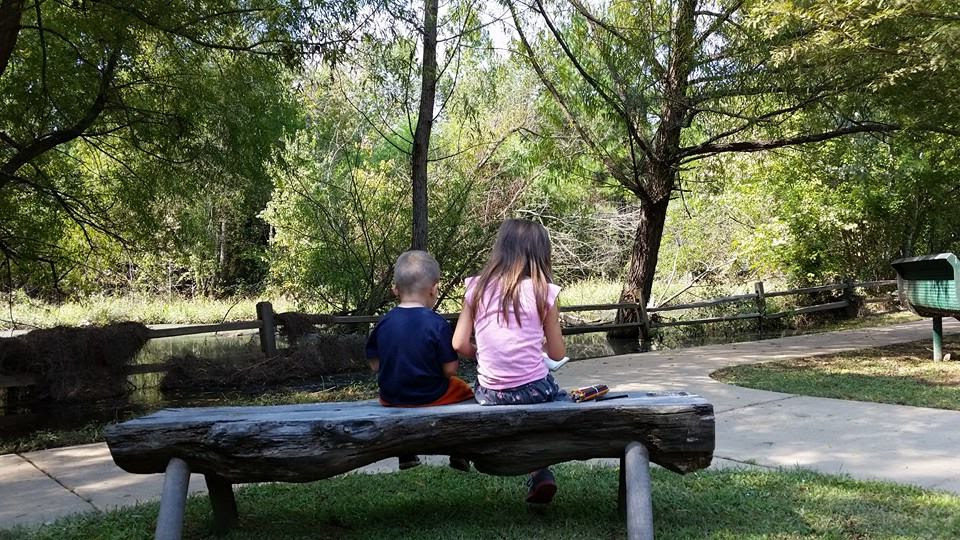 My Top 5 Favorite Things About Home-schooling in the Military