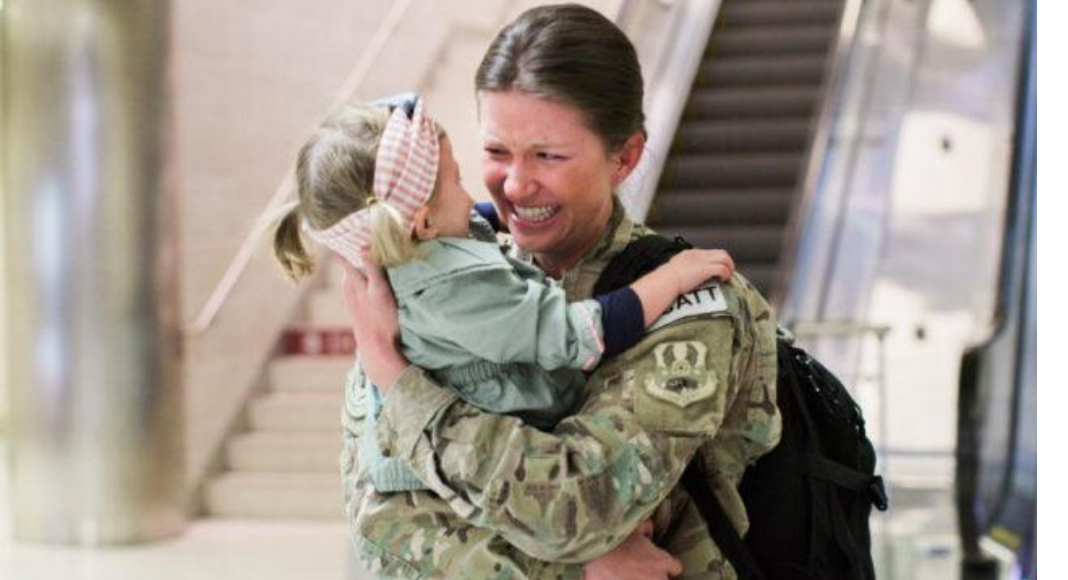 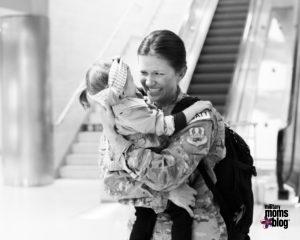 It started with a boo-boo. She face-planted off a Costco bottle of laundry detergent. Blood oozed from her lip and tears poured from her eyes as she buried her face in my neck. At 15-months old, it was my daughter’s first real injury. Any other day, I would have found peace and purpose in the simple act of comforting my baby.

But this day was different.

This was the day I was leaving for a six-month tour in Afghanistan. I was deploying as a mom.

All I could think about was all the opportunities to comfort that I would miss. She’d be running to someone else, seeking comfort from someone else. As grateful as I was that she would be well taken care of, it hurt deeply that it wouldn’t be me.

To this day, I have no idea how I found the strength to walk out that door.

Three days later, after spending 25 hours on a plane in seat 22A, I marched in 100-degree heat along a flight line in the dark. Outfitted in 40 pounds of body armor, with an equally heavy pack strapped to my back, I marveled at how I had gotten to this point. The sequins and stilettos in my closet back home felt millions of miles away. The nearly-full moon shone brighter than any of the spotlights. Tears stung my eyes as the lyrics of a lullaby sprung to mind:

In the weeks leading up to my departure, I had begun to sing this lullaby to my daughter. Even as we were on opposite sides of the world, I had hoped that we would each be able to see the moon and take comfort that the other could see it too. But my plan had backfired. Amidst the strangeness of my current situation, I had never felt farther away. I had no idea how I would endure six months of this.

My mission downrange was to provide a very nuanced form of medical support. Thankfully, I was not very busy. On average, I found myself actually working about twice a month.

While this meant wonderful things for the health and safety of our troops, all the downtime wreaked havoc on my heart. There were days when it honestly felt that time was moving in reverse. Time was my biggest enemy; it was the single greatest thing standing between me and getting back to my family. Day in and day out, I waged war with boredom and despair, battling for control over my thoughts and emotions, determined to redeem the time.

I read a lot. I wrote a little. I made friends. I hit the gym religiously just because I could. It would have been so easy to wall off my heart, to shield myself against the big, painful emotions that are necessarily entwined with separation. Many people that I knew did just that. But I knew my relationships would take a hit in a big way if I took this easier way out.

I was no stranger to grief, having lost my father unexpectedly two years prior. This separation, though temporary, evoked many similar, familiar, unbearably painful emotions.

I chose to feel them. My heart cracked wide open when I walked out that door, away from my baby girl. And I knew that if I closed it off to avoid the pain, it would mean shutting her out.

The time difference made daily contact difficult, but eventually, we fell into a rhythm. Early afternoon in Texas was 10.5 hours later where I was, so I grew comfortable going to bed late. Every day I sang to her over FaceTime as our wonderful nanny was putting her down for her nap.

I started out singing “I See the Moon” and “Twinkle, Twinkle, Little Star”—some favorite old standbys — but over time, I felt the need to expand my repertoire. The Beatles’ “Blackbird” and the chorus of Bob Dylan’s “Mr. Tambourine Man” made their way into the rotation, as did Frank Sinatra’s “Moon River.”

As her vocabulary expanded, she would make requests. She seemed to love exercising some control over her naptime soundtrack, and it always amused me to see where her mood took her on any given day.

We connected in other ways, too. I’d send her videos of the various places my downrange travels took me. Our nanny was faithful in sending tons of pictures and videos from their daily activities. I took advantage of the United Through Reading program, recording a DVD of myself reading her a book, then sending her both the book and the video I had made. If the timing worked out, we tried to FaceTime during other times of the day as well.

But naptime was special. It became the thing I tried to never miss. I breathed silent prayers of thanksgiving to Steve Jobs for creating the technology that allowed me to participate in her daily routine. We were on opposite sides of the world, yet we were truly connecting. Every day I would watch as her little body calmed and settled as I sang to her.

It felt powerful, knowing that I could still bring her comfort from so far away.

Though time crept by at an agonizingly slow pace for me, all I had to do was look at my daughter and how much she was changing, to know that it was definitely passing us by. She was a baby when I left, barely walking. But she became a full-fledged toddler over those six months.

Her needs shifted. Before, all she needed was food, sleep, and tons of love. But as time went by and her strong little personality began to emerge, it became apparent that she was going to need some loving correction, too. This was not something my husband and I had discussed in all of our pre-deployment prep. Schedules and time zones made on-the-spot discussions impractical and basically impossible.

My husband was working 60-hour weeks and then coming home to be a full-time parent. There wasn’t a lot of time for us to pontificate about our joint disciplinary theory.

But when your toddler hits someone, you simply can’t wait three more months until her mom gets home to address it.

Initially, I was left out of a lot of discussions about how to correct our daughter. This was largely out of necessity, due to the aforementioned challenges. But when I learned about what had been put into action without my input, I was hurt. Not angry—I knew my husband was just doing the very best he could—but hurt.

Missing out on this basic, essential aspect of parenting wasn’t something I had anticipated. It was a big, painful reminder that I just wasn’t there.

It was in these moments that I felt the distance most profoundly. For as much as we can close the gap with technology, there is simply no substitute for a mother’s day-in/day-out presence. Though women are fully capable of performing the tasks demanded of men in the downrange setting, the reverse is not always true when it comes to the void we leave back home. Mothers are truly irreplaceable creatures. But I wasn’t necessarily convinced of this at the time.

Eventually, the pages of the calendar turned, and it was finally time for me to go home. I had a lot of mixed emotions in the days and weeks leading up to my homecoming. The last month really was the longest. Something about being so close to the finish line made it still seem impossibly far away. Every night I would dream about the moment I would be reunited with my husband and my daughter. I could almost taste how sweet it would be.

Then anxiety would creep in, unbidden, and cause me to doubt. What if it wasn’t as sweet a reunion as in my dreams?

I prepared myself for my daughter to be shy, hesitant, reluctant even.

I prepared for a potential awkwardness to exist between me and my husband.

I prepared for my daughter to run to someone else—my husband, her nanny—when she got hurt.

I steeled myself for the possibility (probability?) that my family would take some time to get used to having me back in it and that I might feel like an outsider for a little while.

It was all an exercise in self-preservation. I had been longing to go home since the moment I left. I knew I’d be crushed if I didn’t try to set myself up for the possibility that it wouldn’t be the happy ending I had spent so many months dreaming about.

Turns out, it was an even happier ending than I could have ever imagined.

My 22-month-old daughter was the first one to see me coming down the escalator at the airport. She broke away from all the adults with her and started running. Toward me. As fast as her little legs would carry her. I scooped her right up, squeezing her hard and trying not to scare her as I choked back sobs. She grabbed my face and turned toward my husband saying “It’s Mommy!”

It ended with a boo-boo. She ran to me and healed the wound in my heart created by many months of separation.

We had done it. It was over. I was home. 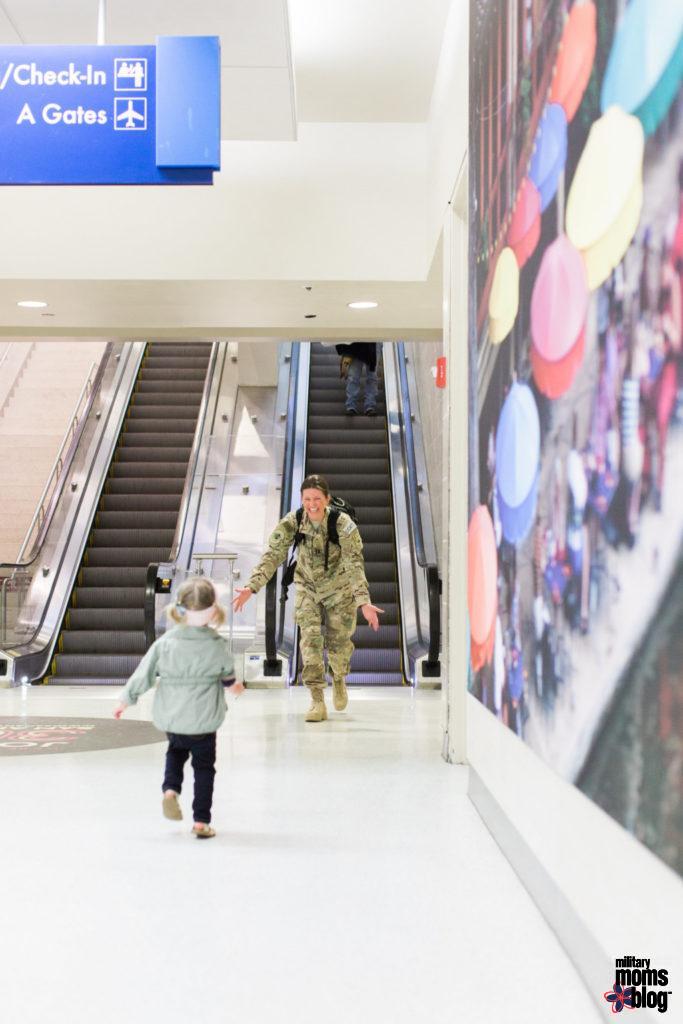 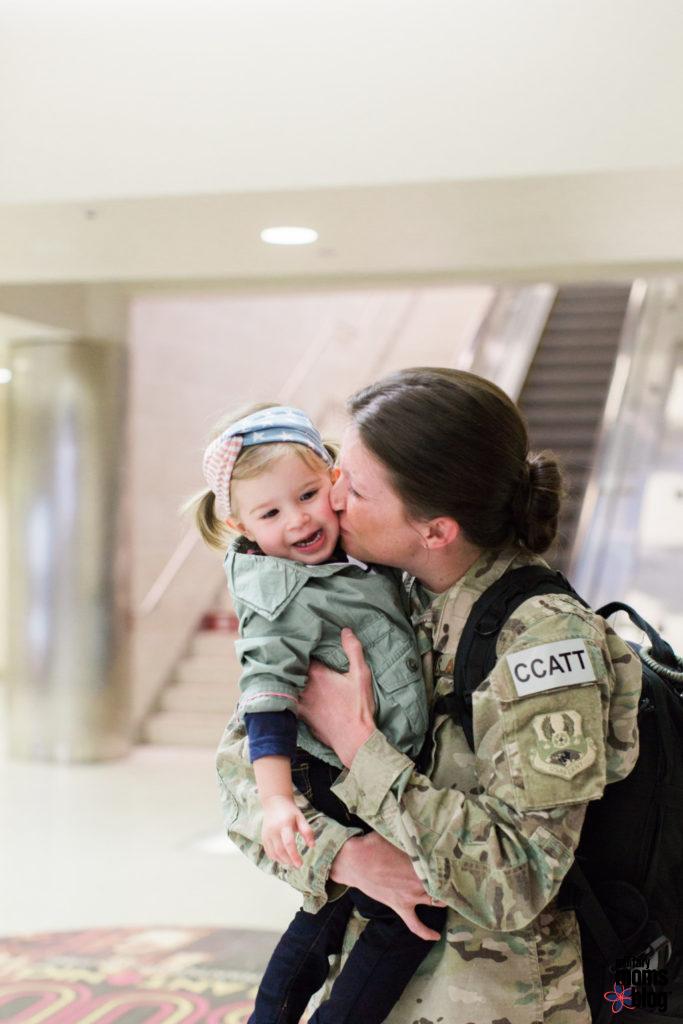 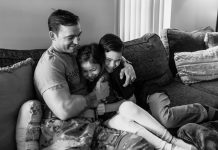 …But This Year, I’m Thankful For The Chaos. 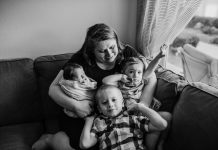 We Be Ridin’ Solo: Wagon Style 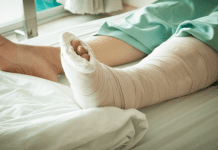 When You’re Forced to Slow Down 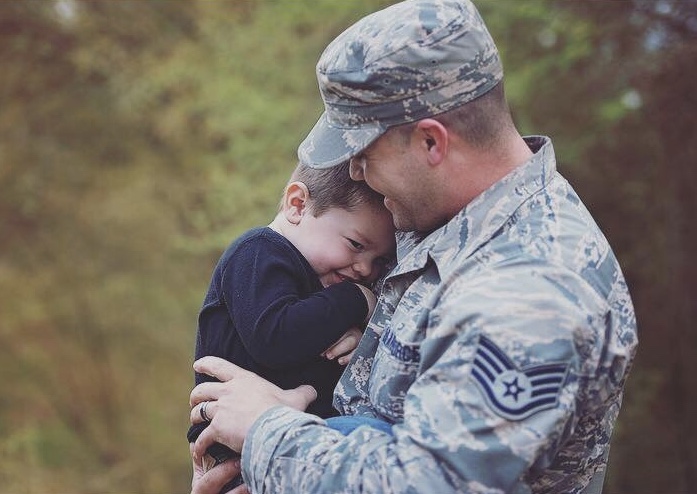 5 Ways to Prepare your Child for Deployment