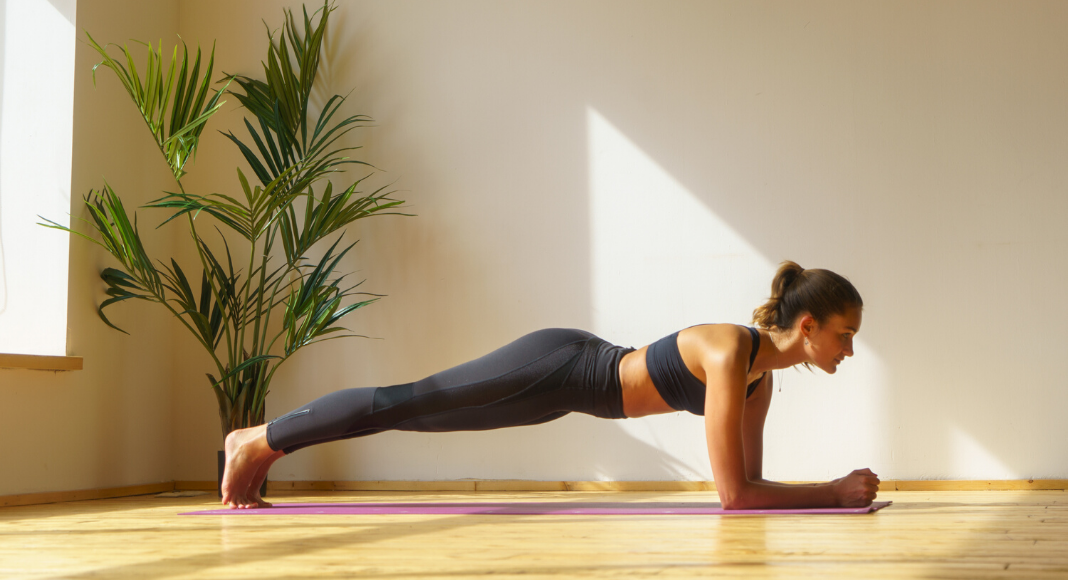 Once upon a time, I was a regular at the gym. Most everyone knew my name; it was like Cheers. The cardio equipment, the sauna and steam room, and the green juice from the beverage bar was my caffeine.

I did all the exercise things because it was fun and not because I felt I had to – until I had kids.

My rate of exercise declined each time a car seat was added. It wasn’t fun anymore. Between babywearing, diaper changes, postpartum depression and anxiety, and early morning formula…I just didn’t have the energy to commit to a regular routine. Our two youngest are 21 months apart. That was my very own double whammy.

Exercising was a cinch when I was fit. I felt cute in my matching activewear! But as the weight crept on, it became a chore. Whenever I wanted to pump it out, I had to find an oversized shirt and a sports bra that could support my large yet deflated chest. Squeezing myself into the said bra and stretchy pants felt like the exercise before the actual exercise.

I was so frustrated with my body though. I missed my noticeable waist and toned thighs. I wanted a middle that didn’t have to be squeezed into jeans. I wanted to ditch my pair of very forgiving waistband jeans.

I tried to get back into a gym routine many times.

I tried keeping my gym membership but stopped attending after our firstborn didn’t take well to the child care. I tried popular programs, ones that promise body-altering results in so many days, only to become disappointed when I couldn’t keep up with the combined meal plan. I tried Stroller Warriors. Twice. It’s a great program for military spouses, but I never really had the desire to work up to running. I joined because I thought I could suddenly glide around the block with my double stroller, shed some pounds, and make some new friends.

Then in 2018, six years after our oldest was born, my husband participated in an advanced training course. It entailed a lot of working out. He’d always been fit, but at 38 years old, I saw him working his tail off in new ways. And I thought that if this ‘seasoned dog’ could learn new tricks, I could too.

I started by donating those elastic jeans. They made gracious allowances, but it was time for them to go away.

I’m not writing this because I have any fitness qualifications. I’m in no way an expert. Military Moms Blog actually has a series of posts written and sponsored by the owner of a certified personal training business, Core Fit. Samantha Costello, a Marine Corps spouse, gives us ways to lead a healthier lifestyle, easy peasy exercises to do from home and healthy, on-the-go snacks.

I’m writing this for every mom that’s ever been frustrated with working out. Because I’m simply an ordinary mama who has been frustrated by workout programs that were too long in length, too tough on my body, or just too complicated.

In this season, this is what works for me:

I exercise at home.

After some online searching, I found some options I liked enough to press play on a fairly regular basis. I usually log into Daily Burn, NoBSactive, or YouTube with channels HMFYOGA, Yoga with Adriene, and Up to the BEat Fit for videos that are generally 30 minutes or less. The first two are paid subscriptions, but YouTube is gratis. 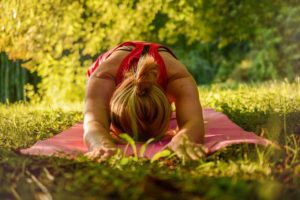 I keep my gear nearby.

If I have to go on a scavenger hunt for my weights, mat, yoga blocks, or strap, I’m probably less likely to actually get into it. My yoga gear is kept in the bottom portion of my re-imagined grandfather clock/living room fixture. My weights are beneath my bedroom dresser. It is kind of like picking an outfit out the night before. Having my items accessible saves time and often prompts spur of the moment workouts. 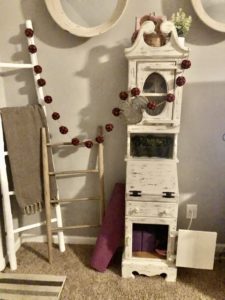 I naturally plug exercising into my days.

I used to struggle with making exercise allowances during the day. I thought it fruitless since everyone would seem to urgently need me once I pressed play. But I did it enough (and told them they were always welcome to join) that they eventually concluded mama was serious about moving. Today I’ll press play while they’re watching PBS in the morning. I’ll pop my tablet on the coffee table and break a brief sweat during their half-hour show. If I want to do one later in the day, I’ll put puzzles or coloring books and crayons on the coffee table to keep them occupied. 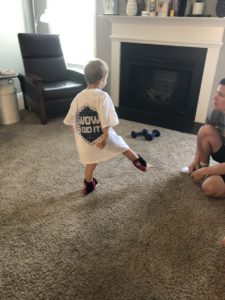 I don’t put exercising in the nap time corner any longer.

I want to do so many other things at nap time. I want to watch a show with a cup of coffee. I want to sit down and write. I want to read a book. If I allowed myself only to exercise at nap time, I’d likely get to it and say forget it. Although I don’t usually sleep when they do, my energy tank often runs low at this time.

I no longer view exercising as a punishment for days of inactivity or days heavier with carbs or sugar.

I no longer feel guilty for missed days. I celebrate my body for what it can do on the days it’s able to do it. That might look like applauding each additional set of mountain climbers before dropping to my belly or holding a warrior two pose longer today than yesterday. It means that exercise is a part of my life, not a way of admonishing myself for eating. And it means that I can eat without feeling as guilty.

My body isn’t showing huge differences, but I feel better. I’m faster on family bike rides and when I chase after my toddler. I’m making time for something that I used to enjoy and that will keep me healthy. I may not be a gym rat anymore, but I can still break a sweat. Today, I’m good with that. 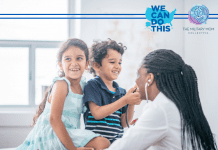 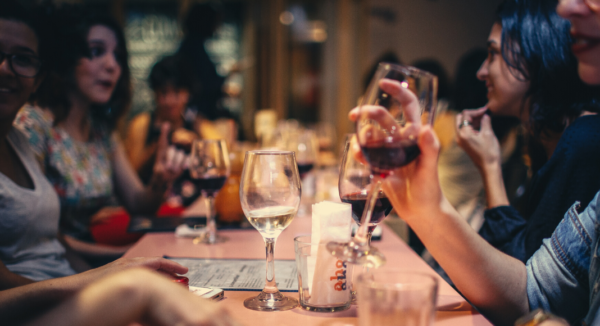 40th Birthday Lessons and Why I am Too Old for Cheap...