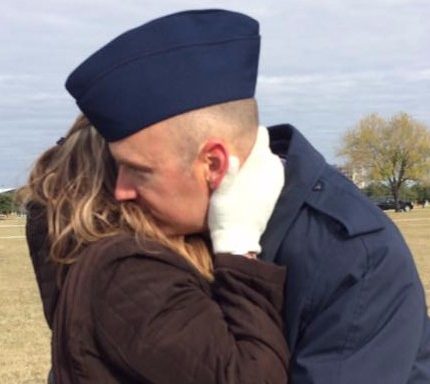 This month marks our ninth year of marriage. As we begin to plan ways to celebrate our 10-year wedding anniversary, I am reminded of all things ’10 year’ we were once heading toward, prior to Air Force life.

Our family took up residence in cozy Colorado Springs for the majority of our lives. It’s been home for decades. In 2017, The Springs’ (as we locals refer to it) population reached approximately 435,000. In our relocation to San Antonio — known to us as the city of cockroaches — the population grew by approximately 890,000, which more than tripled the amount of humanity we’re accustomed to. Ironically, we’ve felt more isolated than ever before.  In a city so large, you can feel so small.

In Colorado, we knew our future. We knew my husband would be embracing his tenth year on staff at the highly rated private school Colorado Springs Christian Schools (shameless plug). We knew he’d continue to teach the Audio Production course he’d confidently built the curriculum for many years prior. We were certain of the future holistic development of our children. There was comparable security in my professional life. Despite all comforts and blessings that familiarity can bring, there was still this gaping hole — this hope longed for yet unfulfilled.

In 2009, my husband auditioned for a position in the Air Force band. Unfortunately, he was not selected. With tails between our legs and a little less hope in our hearts, we sheepishly walked into our previously known futures. Those unresolved years built in us a certainty, a confidence, a maturity. In 2016, he auditioned again with five other candidates competing for two open positions. Only one position was filled that day, and we inched a bit closer toward resolve. Initially this position meant 20 years in cozy Colorado snuggled up to fire pits with extended family. But as military life would have it, that dream quickly changed. We were notified the position would no longer be stationary. We could move in as little as three years which in reality resulted in six months. 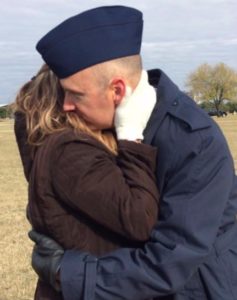 As strangers to this land, both San Antonio and the Air Force, we know just how much we don’t know. My husband started his career at a low rank, which was humbling. We also are an older couple (not elderly or anything but it feels close enough)!  This increased our humility in many ways. Two steps forward ten steps back.

In his prior career, my husband was already ranked highly. He was admired and respected. He’d proven himself over the years. He was “known.” He’d now begun the Airman infancy stage. Crawling … then walking.

It’s a slow process, but a long-term one that will be quite satisfying.  It does, however, come with its challenges, as we military spouses know. I am learning terms like Dependapotamus (which I think is downright terrible), the need to put down the cell phone while I drive (which, let’s be honest, I should do anyway — especially in San Antonio!), and what to do when “Retreat” plays on the muffled Charlie Brown speaker.

I’ll humiliate myself for a moment with a new military spouse story.  My folly is to your benefit.  When I first heard “Retreat” play whilst unpacking, my garage and kitchen door open wide, two ladies glanced in across the street. They stopped and stood still with their hands over their hearts as the song played through, all the while peering in at me as I dutifully unpacked, as if to say, “You’re doing it wrong.”

I finally stopped, put down the dish and stood with my hand over my heart as the song finished (perhaps that’s what was expected)? In hindsight they may have been watching my misbehaved children playing joyfully outside as they too were unaware of the unspoken rules. Once I learned from my husband the appropriate behavior during “Retreat,” I thought of that incident often and wished they’d have just thrown a bone — an introduction, a playful reminder on the do’s and don’ts of all things military related that we were ashamedly unaware. Any little bone would have sufficed.

You cannot know what you do not know.

The privilege of being known comes with great advantage. It powers previously earned trust. Sometimes you just want to go “Where Everybody Knows Your Name” as Gary Portnoy so eloquently puts it. The unknown creates fear, uncertainty, and doubt — particularly in its earliest stages.

While exciting, the new reminds us of our lack of control and of how small we really are. As in a mirror, it reflects our vulnerability and commences a new game of hide and seek. If we hide more than we seek, we end up isolated and alone with a slow painful realization that no one else is playing this game.

We are just … alone. Hiding.

If there is one thing to learn as a new military spouse whether you are an extrovert or introvert, a stay-at-home mom or an ambitious entrepreneur, you must extend yourself if you desire community and friendship. And when I say you, I mean you, the one reading this right now clinging to old hopes and familiarity.

We all want community and friendship. We all want to be known. We all want to be loved. We must reach out of our insecurities and boldly grasp hope in the new. Sometimes that means taking the initiative to walk over and introduce yourself to the presumed peering neighbor. This can be incredibly uncomfortable but completely worth it (she is now my favorite neighbor by the way). On a side note, if you’re an oldie but a goodie to military spousehood, throw a bone to us newbies once in a while. It gives us glimmers of hope to chew on.

As we leave behind the past 10 years, we are tenaciously moving toward the future. In spite of our infancy stage, we celebrate:

So, what about you? 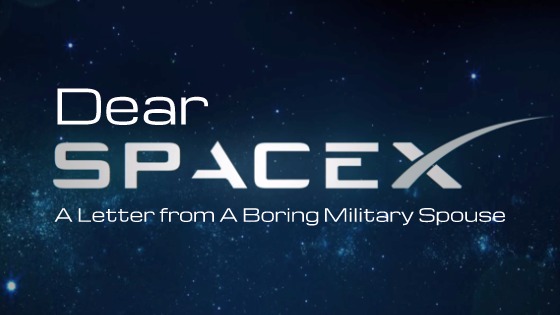 Dear Space X: A Letter From a Boring Military Spouse