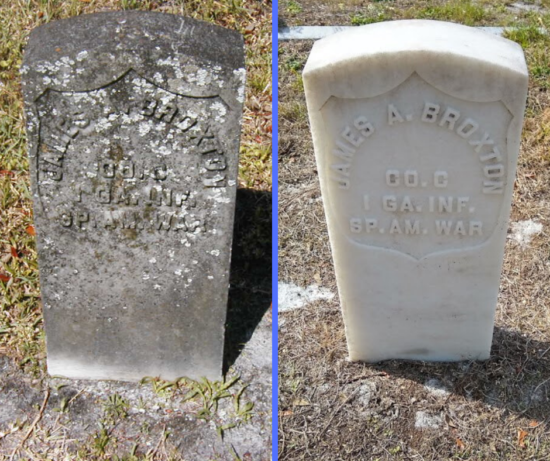 He could have picked golf. Or fishing. Or even shooting.

The list of potential hobbies are endless for a retired warrior, yet my husband chose a pastime that honors the fallen – cleaning veterans’ tombstones.

His love of history has often prompted him to walk the manicured lawns of national cemeteries, but a stroll through a local unkempt graveyard took his interest to a deeper level. As he struggled to read the names etched upon old slabs of rock, he was moved by the idea that veterans of past wars were laid to rest right before him. Yet he was unable to pay them the honor they are due simply because he could not read their names.

A quick Google search led my husband to a YouTube video demonstrating a cleaning product that removes the grime and dirt from tombstones along with the proper techniques required to clean the monuments without compromising the integrity of the rock or causing further decay. Then he ran across a video of a man who does exactly what my husband was wanting to do himself- restoring the tombstones of fallen veterans.

These videos inspired him to do something about the monuments in our local cemetery. Soon he had set about uncovering the names of veterans who had otherwise gone unnoticed and forgotten.

As a wounded warrior, my husband feels a deep connection to those who lay beneath the stones he cleans. He wants their names to be remembered. He wants their stories to be told.

After posting a few pictures of his work on his personal page, my husband decided to create a Facebook page dedicated to the names he had uncovered. Together, we dug through the archives of the internet to learn the stories of the men and women laid to rest in our town who had served so selflessly for our country. Uncover Our Names showcases not only the hours of scrubbing and rinsing and digging and restoring that my husband has done; more importantly, it showcases the stories of the heroes who are buried in our town.

Cleaning veterans’ tombstones has connected my husband to the past while simultaneously ensuring that their stories will continued to be shared in the future. When he completes a restoration, he snaps a few pictures, salutes, reads their name, and then moves on to the next stone in need.

He’s uncovered a musician in the 14th NY Infantry from the Civil War, a delegate in the Florida State Senate who voted against secession and fought in the Seminole Wars, a soldier who fought in the Battle of New Orleans under General Andrew Jackson, and even a horse that was used to carry the bodies of the deceased from the funeral home to the cemetery for years.

He has found tombstones under bushes and leaves and dirt. He’s dug up the land around them to uncover stones that were all but completely lost to us. He works tenderly and meticulously to restore them as best as he can and then to share their stories with patriots of today who care about those who worked tirelessly to preserve our freedom in the past.

My husband does not like recognition and did not want to even be mentioned in this article but I think his story is important because it reminds us all to pay a little more attention to those who have gone before us.

He has cleaned civilian tombstones in need of a little TLC as well, but it’s always the veteran stones that speak to his heart. He shares their stories on his page not only to honor them but to hopefully inspire others to consider following his steps in their own local cemeteries. It encourages him greatly when he hears that he has influenced scout troops, families, and individuals to uncover the names of heroes in their own towns.

Cleaning veterans’ tombstones has become an honorable hobby for my husband, and it has also encouraged the involvement of many others.

Friends and relatives from all over continue to send him gallons of the cleaning product he uses so that his work will never have to stop. In a world where everyone seems to be so focused on making a name for themselves, it’s refreshing to see so many people dedicated to uncovering the names (and the stories) of those who have gone on before us.

Memorial Day will be here before you know it, but there’s no need to wait until then to show honor to the fallen.

Take a walk in your local cemetery and research their stories. Uncover some names of your own. Share these stories with your children or bring them along and let them help you unearth the names of some of this country’s greatest heroes. After all, in America, we pride ourselves on being the land of the free and the home of the brave. We owe it to these brave men and women to uncover their names and share their stories so that they may never be forgotten. 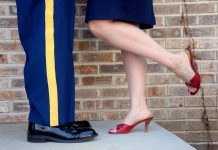