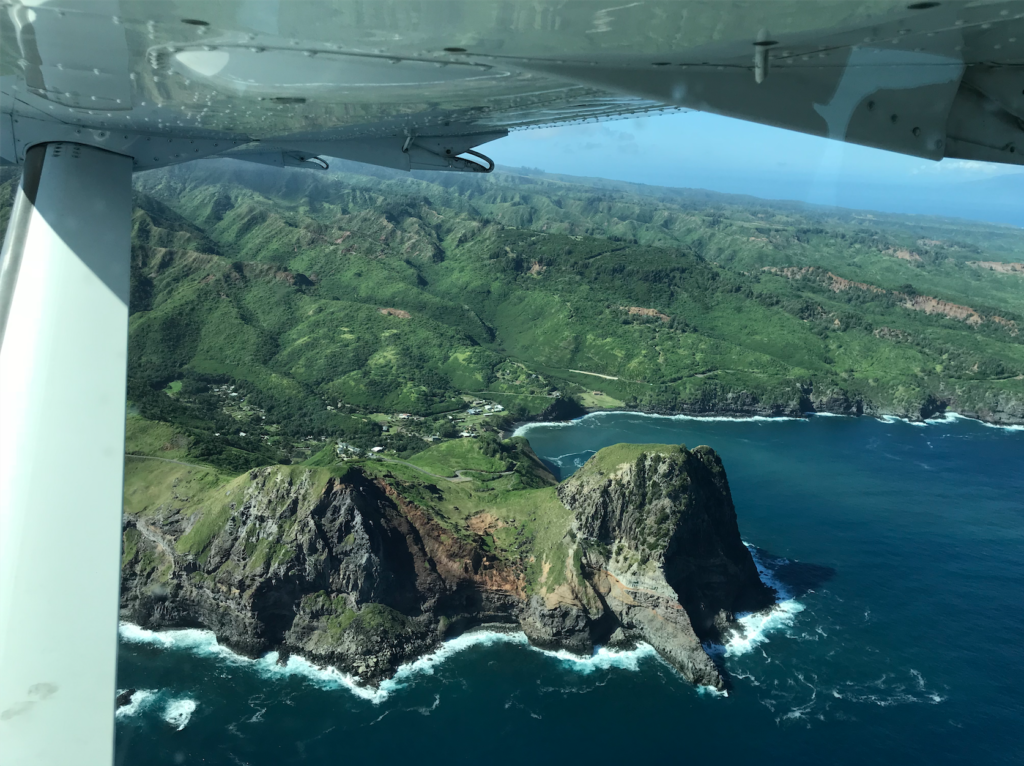 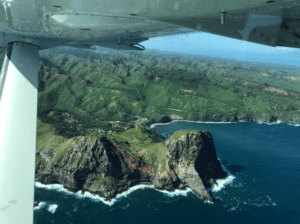 I left them with no question of my love. I know this, because I had catalogued each hug, each kiss, each whispered “I love you,” as I climbed, with some trepidation, onto the tiny propeller plane that would carry me from Oahu to Maui on Friday morning.

As the red and white puddle jumper soared over lush green peaks and crashing waterfalls, I thought of Henry’s soft cheek pressed to mine, and of Jacob’s cheek, too—how he sweetly leaned into my kiss at preschool drop-off that morning. He had asked for a kiss, and I eagerly complied; for weeks he had said I was only allowed to kiss him at the zoo.

My husband’s eyes, the same color as the sea below, rose before me. I had kissed him, too, though not on the cheek. Several times. I had hugged him so tightly that he had laughed. I was only going away for the weekend.

When my phone buzzes with the missile alert, I wonder if I’d had some kind of premonition.

Jenn is to my left, navigating the rental car across an open field to our condo. She persuaded me to get up at 3:45 this morning—about an hour earlier than my kids usually wake me—so we could see the famous Haleakala sunrise. It was worth it. Perched up on a pile of rocks on the ridge of a dormant volcano, we saw the world begin again.

Now, back in the valley, we wonder if we’ll see it end, too.

The alert yells at us, all caps, instructing us to take immediate shelter. With no buildings or other structures nearby, we instead call our husbands and continue to drive.

My skin is on fire. The fear has erupted, hot and fast, spreading out through every pore. This can’t be real, and yet — I hadn’t believed the smoke alarm was real, either. Not until my brother, my mother, and I were outside watching the roof’s flames lick the sky. Not until we walked through the ashes to see what could be saved. When the alarm bells sound, you don’t just stand there in disbelief. You run.

The day of the fire, I called my dad. “Dad? Everyone’s okay. But you need to come home right now. The house is on fire.”

Now, I call Tim, and he doesn’t answer. He is changing Henry’s diaper, but I don’t know that.

The voicemail I leave is not nearly as calm as the message I gave my dad thirteen years ago. “I am freaking out,” I say. “Have you heard anything? I love you. Please call me back. Please.”

Jenn and I flew to Maui—me, in an island hopper, Jenn in the multiple jumbo jets it took to get here there from Nashville—so we could run an oceanfront 15k together. Months earlier, when we first agreed to train, neither of us could comfortably run two miles without stopping. But we both wanted to be stronger. From afar, we exchanged running plans and running pains. She told me about KT tape. I shared with her the magic of running slow.

Before last night, we’d never laid eyes on each other, mutual internet stalking notwithstanding. We are writing friends, mom friends, online friends. In a season of motherhood that has made connection difficult, I’ve come to rely on her Voxer messages and texts. We have listened to each other’s lives, and in the sharing of our stories I have remembered who I was and am; and who I still want to be.

Jenn and I have been IRL friends for less than 24 hours, and here we are, away from our families, about to die together. 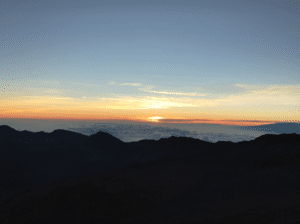 Earlier, as I sat perched on a rock beside her in the darkness, bracing myself against the cold wind that brought tears to our eyes, I thought of how different the morning would be with my husband and boys by my side. Not better, not worse. Different. And I was glad to be there without them, with a friend. I miss this.

Without light, we had scrambled onto the rocks, feeling our way with our hands. As the light from the sun crept across the sky, I watched the landscape below come to life. What had once been inky black was now gray. I saw at once how much higher I was than I had realized and how much safer I was than I had feared.

Now, just two hours later, I ask myself why I thought this trip was a good idea. I’m with a friend who has talked me through deployment and toddler tantrums and anxiety medication, but I am not at home with my family when it matters most.

If Jenn weren’t here, I’d Vox her, I think. I’d tell her Tim’s not answering his phone, and I might be about to die but then again maybe my anxiety’s getting the better of me. I’d ask, “Am I being paranoid for believing this?” Jenn always talks me down in a crisis. She helps cut through the maelstrom of my thoughts to see a clear picture of what’s real and true. Voxer Jenn would know what to do.

But IRL Jenn is talking quickly to her husband as she drives, telling him to Google “Hawaii missile threat.” I am not paranoid. She is panicking, too.

At home in Oahu, Tim sees my missed call and the missile alert at the same time. When he calls back, his voice is measured and calm, as you would expect of an Emergency Room doctor. “There’s nothing online,” he says. “There are no sirens. Are we sure it’s real?”

I can hear Jacob and Henry playing in the background, and my throat constricts. It’s a Saturday morning, and I’m not there. For a moment I am flooded with gratitude that Tim asked for the weekend off. They’re with their daddy, I think. I can’t shield them from what’s coming, I can’t throw my arms around them in the final moments, whispering how my love for them is bigger than the galaxy. But their daddy is there.

There is no comfort at the unbidden thought, creeping slowly and solidly into my consciousness: If there is a missile, it’s not headed for Maui.

My body—this soft mid-thirties body that has loved my husband and carried my boys and trained to run this silly 15k—may actually survive. But life as I know it could end, my home and my heart destroyed in a flash.

I’m no longer surprised by the thought of imminent tragedy. I sink into the passenger seat, replaying the mental images of when I said goodbye. 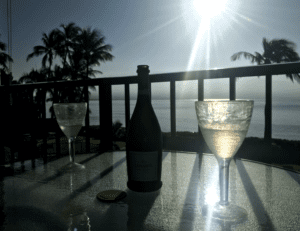 Twitter tells us Hawaii is safe, and we tell ourselves it’s OK to trust a tweet from a politician. The second iPhone alert buzzes through, and my hands won’t stop shaking.

We arrive at the condo. I pop open some Prosecco and allow the delicate bubbles to soothe me. The bottle was meant for tomorrow, for our post-race celebration, but what is finishing a race when you thought you were going to die? We laugh. We curse. No matter what I do, I can’t make myself cry.

Hours later, after brunch and a nap in the sand, I scan my News Feed and read story after story of mothers who simply held their children tightly—in closets, in bathrooms, under stairs—and I let go with a sob.

I am their mother, and I wasn’t there.

It’s the morning of the race, and it’s early and dark, again. At home, my boys are sleeping peacefully in their beds, and I am up, my legs like lead. But there is breath in my lungs, and I am doing this.

Before we run there is a Hawaiian blessing, deep tonal sounds breaking through the dark. Jenn and I stand in a circle with the other runners and hold hands. Quiet and still, we breathe in the salty morning.

The race starts, and we run, one foot after the other. It is hot and humid, and we are tired. There is adrenaline, but not like yesterday, and at once the race feels like it matters more than ever and it doesn’t matter at all. 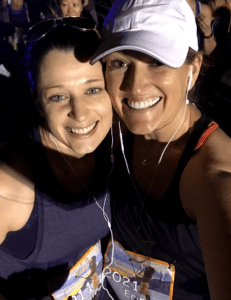 I watch the water sparkling in the early sunlight and I think of my family, the boys’ soft cheeks, my husband’s blue eyes. Tonight I’ll come home with a medal, with stories, with arms that will grab tight and not let go. I refuse to give in to the guilt that has been plaguing me since yesterday, because being in Maui is not a mistake.

My husband and my boys are my people. But so is Jenn. And running this race is a hard thing that will only make us stronger. Not just for ourselves, but for our people.

My phone buzzes. After yesterday, I should feel afraid, but I don’t.

I glance down to see a text from Tim, who is tracking the race: “You’re crushing it!”

I grin. I tell Jenn what he said, and we pick up the pace. 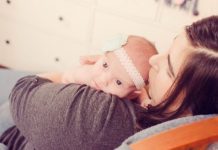 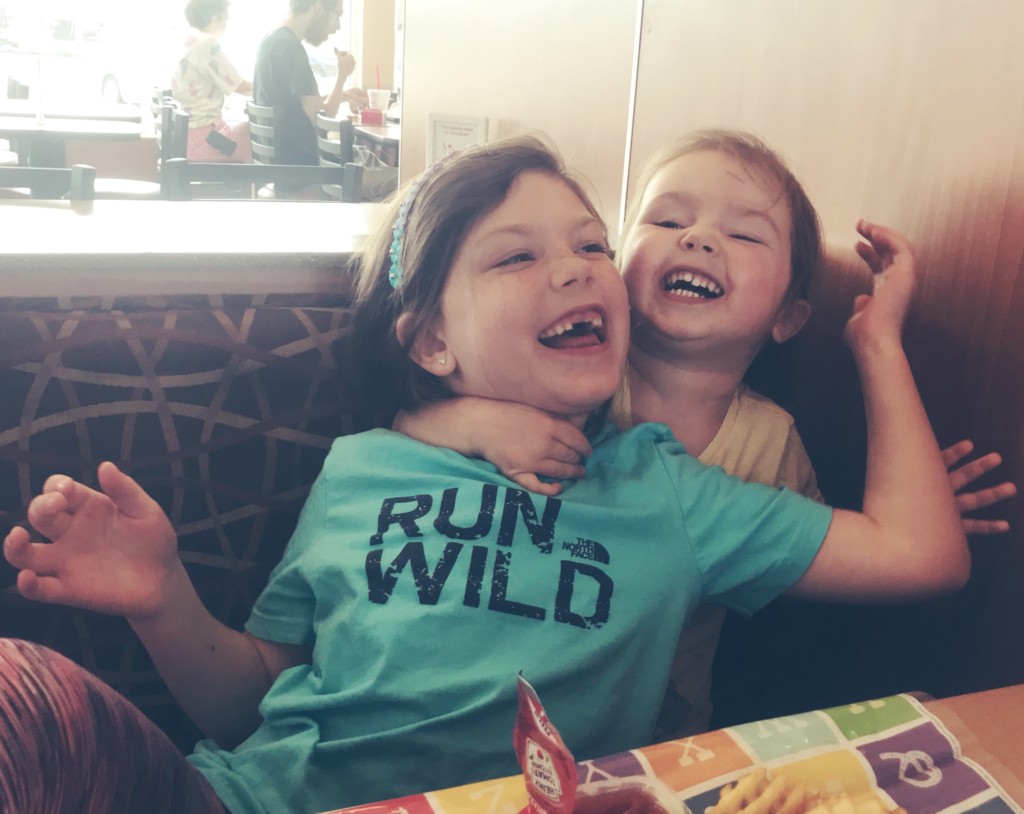 The Day I Cried at Chick-fil-A